“The creation of a civilized internet” is what French President Nicolás Sarkozy proposed a few days ago for the agenda of the upcoming G-8 meeting. President Obama has also agreed to give priority to the issue of “taming the web” at the meeting of the most powerful countries. There seems to be a certain coincidence of interests in favor of varying degrees of repressive digital measures from a broad coalition formed by intellectual property hardliners, rabid wikileaks critics and a number of big brother authoritarian governments like those of Egypt or China. 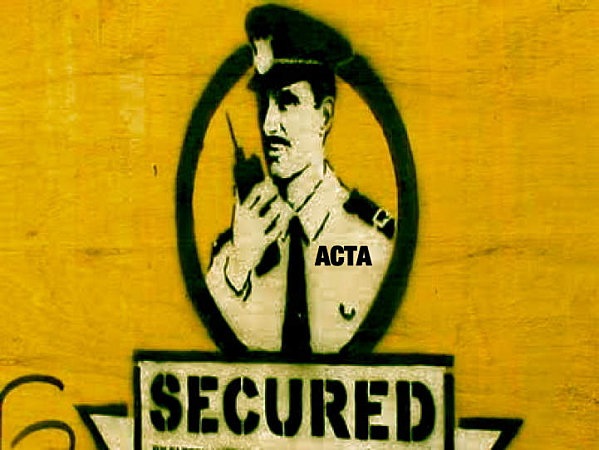 Along the same lines, Pedro Velasco Martín, in representation of the
European Commission opened Tuesday´s stakeholders meeting in Brussels
on ACTA (Anti-Counterfeiting Trade Agreement) with a revealing and
loaded question: “Should the Internet be a haven for lawlessness or
should it be treated equally to the physical world?”

It seems rather shocking that one of the people who has been in charge of the
EU’s negotiating positions for the last three years on ACTA would
express such a lack of appreciation of the unique democratic, social and cultural
roles performed by the digital environment that are very distinct from
the workings of “the physical world”.

Before considering the content of the proposed treaty Mr. Velasco spoke of the timetable for its ratification. The ACTA agreement that has been hammered out by 37 countries (27 of which wererepresented by the European Commission and the EU Council) will be soon
officially adopted officially by the EU Council of Ministers and then
submitted to the European Parliament for its “assent” (a yes or no
vote). What is not clear, due to inconclusive legal interpretations by the Commission, is
whether ACTA must be approved by each of the 27 national parliaments of
EU member states. If member state parliament approval is required the
ratification process could last up to two years. If not, the fate of
ACTA could probably be decided within the next five or six months.

Also on an important procedural level, Mr. Velasco was asked why the European Commission “initialized” their approval of ACTA last November without first informing the European Parliament of this important decision as stipulated by the Lisbon Treaty.  After trying to dodge the question by mentioning the mere presence of Commissioner De Gucht in Strasbourg, he had to admit that he could not answer this without first consulting his legal services.

He would also not comment concerning the court case that has been brought before the European Court of Justice against the EC for its application of the “McCoy agreement” on the confidentiality of “maintaining the confidentiality of documents”. Curiously, McCoy is the US Trade Representative.  The EC is accused of not fulfilling the EU legal requirements of transparency and parliamentary information. Throughout the negotiation process the EC negotiators insisted that they had to be “loyal” to their US partners with regards to transparency. Apparently they might have been more loyal to Mr. McCoy that they were to EU law and to European Citizens.

Mr. Velasco’s double-speak became especially strong when he affirmed that while
ACTA did not change any “existing Community Acqui”,  EU member
states would be forced to change their laws to conform with the new treaty.
While ACTA does not harmonize criminal penalties in Intellectual Property enforcement on an
EU level, it could have an impact on the laws of 27 EU countries, one of
which he said was already in the process of changing its legislation. In
other words, the EC accepts that ACTA is a classic exercise in legislation
laundering in order to enact tough IP enforcement measures through the back door of an international negotiation. In this way a tough political debate on IP in the open arena is avoided and substituted by the opaque maneuverings and back-room horsetrading of EU member-state leaders who deeply fear the broad defense of fundamental rights in the digital sphere supported the majority of European public opinion. Needless to say, the ACTA “country club approach” that limits public debate much preferred by the lobbyists, like the US Chamber of Commerce, that are behind ACTA.

When asked about the binding nature of ACTA in the EU and the fact that it is not considered a binding agreement by the US, and is not even called a “Treaty”, he responded that it is not the EU´s problem if the US considers the ACTA treaty differently and the EU ignores the issue of  whether ACTA contradicts US law or not.  When Velasco was pressed on the issue of US official insistence that ACTA will not change a number of US laws that conflict with ACTA or with a recent US Supreme Court ruling on limits to IP damages and penalties that indirectly declares ACTA-like rules “unconstitutional”,  he showed a great deal of uneasiness and evasiveness. According to a number of reliable sources an official but confidential Library of Congress study commissioned by the US Senate has apparently certified that ACTA clearly goes beyond US law in a number of instances. At the same time, contrary to the intentions of the European Commission in Europe, the Obama Administration has no intention of enforcing the articles of ACTA on US territory and exclusively views ACTA as a “strong benchmark” to be imposed upon trading partners in Asia, Africa and Latin America by means of future free trade agreements.  The EC representative did not respond to the question of whether this “practice what I preach, not what I do”,  free-rider attitude by the US, along with its “fair use” norm, could give the EU´s main negotiating partner a competitive advantage of the EU in developing emerging business models.

Mr. Velasco was also asked about the ambiguous and potentially all-encompassing definition of “commercial scale” that in the ACTA text refers to any “direct or indirect economic gain” that can be applied to individual file-sharing with no commercial objectives.  He admitted that this definition of commercial scale contradicted the much narrower one approved by the European Parliament but dismissed the opinion of European democratic representatives with the argument that it was never enshrined into any existing legislation.

The EC also denied that the damages, injunctions or other remedies sections of ACTA would have any impact on the future access to orphan works in the EU by placing future legislation in a straightjacket. He repeatedly confused orphan works with “exceptions to copyright” that he stated the EC respected.  When asked about a possible future legal enshrinement of “fair use” of copyrighted works in the EU and how ACTA could inhibit this, he insisted that “fair use” was a non-European concept and practice that was not relevant for the EU. When queried a number of times about ACTA  possibly slowing the growth of new digital business models that need flexible rules as well as restricting the access to knowledge, he proclaimed that “history will show who was right.”

The EC representative admitted that ACTA is only one link in a much longer chain of EU new legislation related to IP enforcement with the same logic that will be presented in the coming months by the EC.  He was probably referring to new proposals on criminal measures (IPRED),  collective management of copyright, orphan works and data protection, among others.

Velasco emphatically and repeatedly challenged the stakeholders present to present “one concrete case of how ACTA violates fundamental rights”. He insisted that IP enforcement measures “have nothing to do with fundamental rights”. When questioned about the EU´s Data Protection Supervisor´s scathing critique of ACTA with regards to privacy, he dismissed his complaints by saying the EC had responded to the Supervisor in a letter.  He affirmed that no one should worry about the violation of fundamental rights by ACTA because the text reaffirms its adherence to international human rights safeguards and guarantees. In consequence, no fundamental rights impact evaluation is necessary as has been requested by Commissioner Vivienne Redding. The EC representative refused to answer why the EU was seeking binding IP enforcement measures but at the same time adamantly rejected the internationally recognized  fundamental “right to read” of the visually-impaired and print-disabled as demanded by the European Blind Union and the majority of non-EU countries in their proposal of a legally binding Treaty at WIPO in favor of an exception and limitation of copyright for millions of blind persons worldwide. Here there seems to be much more sensitivity shown by the European Commission to the requests of Hollywood (as revealed by Wikileaks) than a clear compliance by the EU with the UN Convention for the Rights of Disabled Persons.

Concerning third-party liability he said that internet service providers´ liability is no more in ACTA than in existing EU lawand that intermediaries already have to show more responsibility.

In order to justify bypassing the relevant UN institutions with ACTA and its new institutional instruments,  Mr. Velasco repeated the now classical and tiresome whining about the lack of cooperation and inoperancy of the World Trade Organization and the World Intellectual Property Organization: “We can´t even get our IP enforcement proposals on the agendas of the WTO and WIPO. They refuse to consider  new measures for the enforcement of existing international law.”

What a terrible burden European Commission officials like Pedro Velasco must bear in their historic crusade to “civilize” the internet!  Especially when the natives are restless in the wild digital jungle!