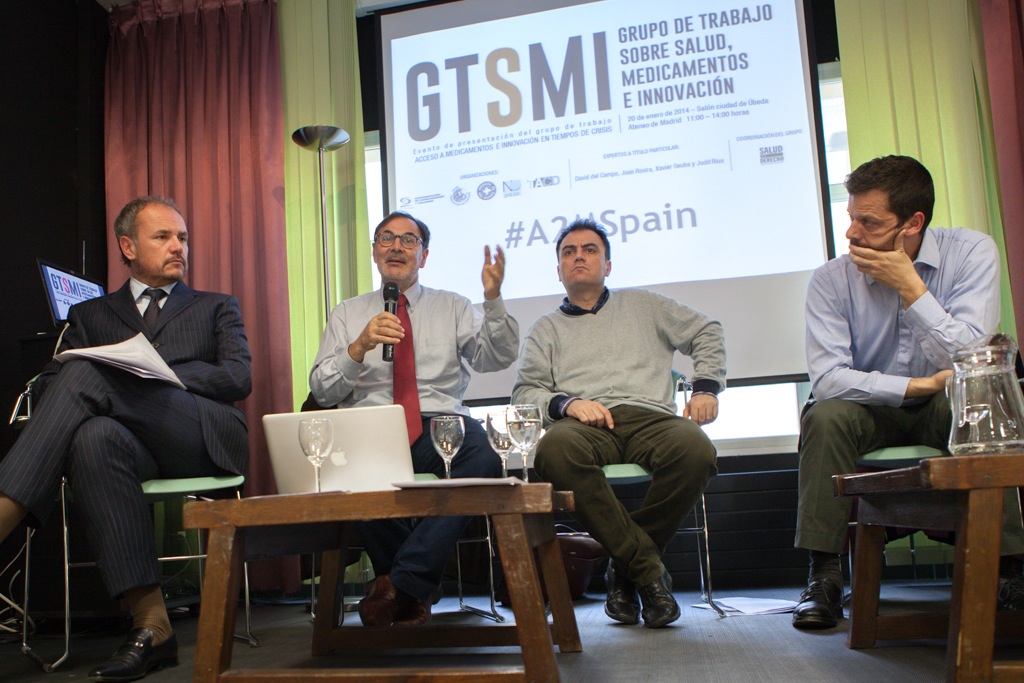 The Working Group on Health, Medicines, and Innovation has been launched with the goal of offering inclusive and constructive recommendations on the evaluation of health access, transparency, the management of expensive patented medicines, and the promotion of new innovation models in favor of the common good.

Madrid, 20 January 2014. Today, the Working Group on Health, Medicines, and Innovation, an initiative made up of a group of organizations and experts from various fields, publicly presented their objectives in an event entitled “Access to medicines and innovation in times of crisis” which took place at the Ateneo de Madrid. This morning, the group met with political parties and institutions to present their manifesto and explain their main concerns. In addition, scientific and professional associations, pharmaceutical companies, NGOs, representatives of the innovation area of the Ministry of Economy and Competitiveness and the Community of Madrid and patient associations, among others, also participated in the event.

Among the promoters of the working group are members such as the Confederación de Consumidores y Usuarios, Médicos del Mundo, Salud por Derecho, Trans-Atlantic Consumer Dialogue, Farmacéuticos sin Fronteras, No Gracias, and the experts Joan Rovira, David del Campo, Judit Rius and Xavier Seuba, and it is intended that more organizations and individuals join the initiative soon.

Vanessa López, director of Fundación Salud por Derecho, explains “The group emerged as a response to an unjust and ineffective management of the crisis, but also because of the structural and traditional weaknesses found in the processes of research, development, regulation and commercialization of medicines, not only in Spain, but also on a global scale.” The working group intends to look at the problem from a comprehensive perspective, because as López says: “The inequity in access to medicines that patients have always experienced in impoverished countries and the lack of research on so-called neglected diseases, is now linked to a growing concern about the sustainability of the system in high-income countries and the quality of innovation.”

David Hammerstein, policy advisor to the organization Transatlantic Consumer Dialogue declares that “A just and participatory response to the crisis requires much more transparency about public spending, as well as the prices paid in the purchase of medicines, and the rigorous evaluation of the efficacy and safety of the medicines and, in general, the actual impact of healthcare cuts.”

The lack of information on most aspects related to medicines, especially those that relate to clinical research, transaction prices, relations between the industry and prescribers, the motivation of regulatory decisions, pricing, public funding, etc.., is an area identified by the Group as a fundamental problem. Abel Novoa, president of No Gracias affirms that “It is necessary to shed light on the generation, dissemination and application of clinical knowledge, because transparency in medicine saves lives,” and he adds: “The lack of transparency goes against the health of citizens, social equity, and professional and ethical obligations including those of innovation itself.”

Also missing are formal and independent studies that assess the impact of the measures taken by the Government, but there is convincing evidence that access for the most vulnerable groups has been substantially affected. In this respect Stefan Meyer, associate director of Médicos del Mundo maintains that “Copayments are unfair because they affect more those people with fewer resources and inflict an additional punishment for the sick. Also, they are ineffective because they do not generate savings or encourage a more rational use of medicines.”

From the holistic perspective that the working group employs, the problem starts during the research and development of medicines. Joan Rovira, professor emeritus of economics at the University of Barcelona and medicines policy expert argues that “Biomedical R&D must be adequately funded and it is likely it requires more resources than are currently being dedicated; but, this must be done with mechanisms and incentives to ensure that new innovations pose a real contribution to health and social welfare and facilitate equal access to them.”

Some of the recommendations already made ??by the Working Group are the following: 1. The independent evaluation of the impact of the healthcare cuts and the introduction of corrective measures. 2. The publication of key information about medicines, such as the prices paid by the different administrations. 3. Changes in the biomedical innovation model to orient it toward health needs and to prevent the privatization of knowledge generated by public investment. 4. Creating a transparent and participatory government agency to evaluate the efficacy, safety and cost-effectiveness of pharmaceuticals. 5. Consider the possible use of compulsory licensing as a potential tool to ensure a balance between the rights of the innovator / owner of the rights and those of society.