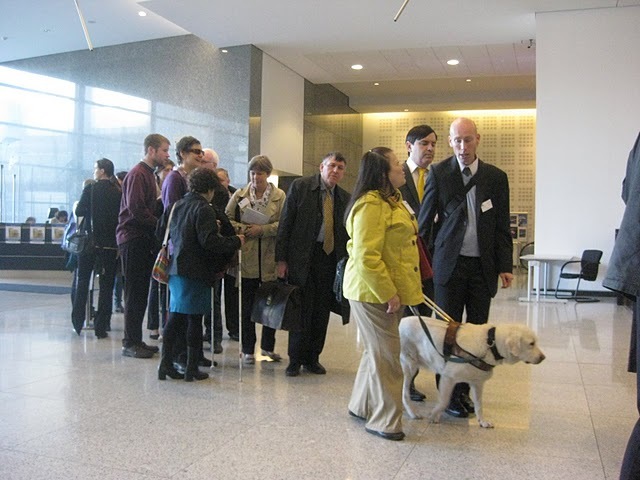 “You can vote against us, you can try to defeat us. Go ahead and oppose a legally binding treaty for our right to read. But, remember, we shall not accept anything less than a new international legal norm.” clearly stated  Rodolfo Cattani,  leader of Italian Blind Union and secretary general of the European Disability Forum in response to  the disturbing European Commission and EU member state opposition to the WIPO Treaty for the Visually Impaired.  As another NGO representative added: “The technology exists for blind persons to access most books; it seems the political will does not.” The Commission and many European Governments, while paying lip service to the “book famine” suffered by blind persons, simply reflect the result of years of heavy industry lobbying against any international exception to copyright, even if it would have negligible or no economic impact on the publishing trade.

Over a hundred people participated in the conference “Fair Access to Culture and the Right to Read of Visually Impaired Persons” sponsored by MEPs Luigi Berlinguer, Eva Lichtenberger and Francisco Sosa Wagner from Italy, Austria and Spain, respectively. The organization of the conference was supported by the European Blind Union and the TransAtlantic Consumer Dialogue.  Approximately half of the participants were members of visually impaired organizations who travelled to Brussels from Italy, Germany, UK, Spain, Belgium and France. Also attending this event were European publishers and authors organizations,  internet server provider representatives, digital rights NGOs, consumer organizations, dyslexic  groups and associations of librarians. A number of other Members of the European Parliament, such as Patricica Toia, Christian Engstrom, Malika Ben Arab and Helga Truppel, also participated.

It has become evident that in any open debate the moral and legal logic of the Treaty for the Visually Impaired will prevail and convince.  The problem resides in the opaque, dishonest European Union  decision making process for common positions at UN institutions like the World Intellectual Property Organization that will make a decision on the Treaty in June. For the past few years there has been a EU Council working group on this issue that has brought together representatives from the 27 EU member states. Unfortunately, these meetings are secretive and there is no way of knowing what is the position of each government.  This lack of democratic transparency prevents any accountability for the EU opposition to the Treaty and permits the cynical contradictory spectacle of the European Commission fighting against the Treaty behind closed doors while most European politicians publicly support it! While copyright fundamentalists rule the back rooms of Brussels power brokers,  no ones seems to want to openly assume the responsibility of slamming the door in the face of millions of visually impaired persons around the world.

According to some sources, France is leading the hard-line position against the Treaty.  Last Monday the French Minister of Culture Mitterrand was handed a letter in favor of a legally binding Treaty at WIPO that was signed by French MEPs from all the major political parties, including Sarkozy´s UMP.

It should be obvious to all that fair copyright laws must be built upon social credibility and legitimacy.  If present copyright laws prevent millions of disadvantaged citizens around the world from gaining and sharing access to culture and knowledge, new international norms are needed.  Our political institutions must be sensitive and responsive to this growing demand.