A rumour is circulating that at the next negotiating round on the Treaty of the Visually Impaired at the World Intellectual Property Organization the members of the European Blind Union will attend the meeting with black pirate flags and one pirate patch over each eye. 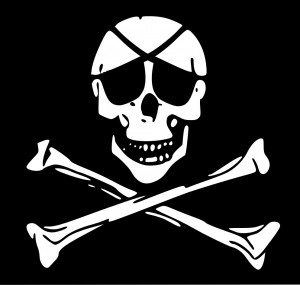 According to the European Union´s representatives  in Geneva this week,
the Treaty for the Visually Impaired is not principally about guaranteeing the right to read of millions of blind persons who presently only have access to around 1% of the books published.  On the contrary, for the EU this is not a question of basic human rights but, instead,  a question of dangerous piracy by blind persons whose subversive quasi criminal activities could mean the beginning of the end of global Intellectual property protection!

Instead of trying to help one of the world´s most culturally disadvantaged groups the EU´s copyright specialists guided by Commissioner of Internal Market Michel Barnier are busy launching violent preemptive strikes against the possibility of a clear, exception to copyright for the non-profit production and distribution of works formatted for visually impaired persons.

In Geneva this week the EU made one negative proposal after another to block a global agreement that would greatly improve access to culture for the visually impaired.  All of them have been rejected by the organizations defending blind and disabled persons rights. Most of them are “copy and paste” proposals from the publishing industry´s wish list. Not one EU proposal this week in Geneva was to facilitate the right to read of disabled persons as guaranteed by international law. Not one member of the EU´s delegation was a human rights or disability expert; all were hard-line copyright apologists.

One especially socially insensitive  EU proposal would create a “digital divide” between a few large,  wealthy organizations and institutions that would be able to produce and distribute digital audio material to their communities and a vast majority of poor cultural entities  in Africa, Latin America and Asia that would only be able to receive and distribute texts in paper form. Another “inclusive” EU proposal would prohibit any exception to copyright if the formatted text(for example an e-book) was “commercially available” somewhere in the world, regardless of the affordability or the accessibility of the product in a poor country.

The EU  is holding millions of blind persons hostage to an irrational, fundamentalist copyright enforcement agenda that has absolutely nothing to do with copyright flexibilities for visually disabled persons. It has nothing to do with piracy either.  Everyone knows  that no money is being lost due to existing copyright exceptions in the EU for blind persons and extremely little will be lost with an effective global copyright exception. The EU has mistaken the WIPO disabilities negotiations as the new battleground for the latest copyright war. James Love has called it “the EU´s ACTA/SOPA agenda.”

Why is the EU kicking  and screaming  so hard if most of their own national exceptions to copyright are much more flexible and simple than what they are defending on a global scale? How can EU member states hide their negative positions from public opinion inside the high walls of the EU Council when most of the EU´s democratic representatives are publicly favorable to a binding, effective international Treaty? How long will it take until a bit of common sense prevails and the EU allows a consensus text to be considered by a diplomatic conference for a Treaty?

The EU, sometimes supported by the US, has taken “the war against piracy” to new heights of absurdity against a new imaginary enemy: blind persons.

7 comments for “The EU declares war on blind pirates”